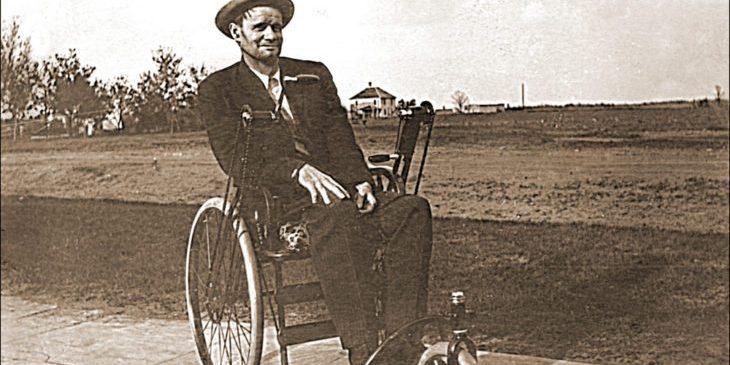 A Brief History of The Wheelchair

Of all the devices that are designed to aid in mobility, few are as instantly recognisable as wheelchair.

For generations this simple yet effective device has allowed millions across the globe to be mobile and independent.

Throughout the years we have seen the arrival of alternative equipment such as rollators, walkers and scooters.

Yet, it is still the wheelchair that is often the most practical solution to your mobility needs.

But what are the origins of the Wheelchair, and how it developed into the worlds number 1 mobility aid.

The first depictions of the wheelchair are dated between the 5th and 6th century BCE. One of these depictions was on a Greek vase depicting what looked to be someone in a wheeled chair.

The next emergence would come 3 centuries, with art from China depicted the use of wheelbarrows as a way of transporting those with disabilities.

Then art dated around 525CE started to depict the first chairs developed solely for the purposes of transporting people.

Beforehand it appeared as there was no chair developed specifically for the task.

Despite these records it would not be until 1595 when ‘wheelchair’ would make its first noteworthy appearance in Europe.

This came courtesy of a nameless inventor who developed a moving throne for King Phillip II of Spain.

The final design was certainly an ambitious one, complete with arm and leg rests.

Sadly, the chair had no way of effective propulsion mechanism. This meant an assistant was always needed to move the king around. The design is more akin to a modern mobile highchair.

Eventually however the first attendant propelled wheelchairs would begin to make their appearance.

However the world would have to wait until 1655 to see what is now recognised as the first self-propelled wheelchair.

This would be thanks to inventor Stephan Farffler, who created the “Manumotive Carriage”.

The design looks similar to a hand bike by today’s standards with a 3-wheel design propelled by a manual crank at the front.

Eventually thought the introduction of the bath chair in 1760 would prove to be the next advancement in wheelchair development.

The chair maintained the 3 wheel approach but removed the crank system. Instead the bath chair was designed to be attendant propelled or horse drawn.

By the end of the 19th century wheelchairs had become a common feature in society.

Nowhere was this clearer than in Atlantic city in 1887. That year the ‘rolling chair’ was introduced to allow invalid people the ability to experience the boardwalk.

However, these chairs became so popular that would often be leased out to regular visitors. Even though they were able bodied they would often be seen being be pushed along the walk by a servant.

Even today rolling chairs are still a part of the boardwalk experience.

A collection of ‘bath chair’

The rolling chair being pushed by an servant in Atlantic City

By the turn of the 20th century the wheelchair was a common fixture in the world, even if access could sometimes be limited.

But it would be in 1933 where the next breakthrough in wheelchair design would occur.

This was down to the work to the work of Harry C. Jennings, Sr and Herbert Everest. These two would go on to invent the very first lightweight steel folding wheelchair.

The motivation behind this was that Everest was a wheelchair user himself. But he disliked the bulky and cumbersome wheelchairs that were available at the time.

As such he and Jennings began constructing prototypes in their garage.

By 1937, they had patented the first working design for a portable steel folding wheelchair.

Their breakthrough came with the invention of ‘X Brace’ design, inspired by folding camp chairs.

So effective and forward thinking was this design that the X-Brace template is still in use to this day.

Two decades later and another big step in the development of the wheelchair was taking shape.

Up until the 1950’s there were 2 types of wheelchair, self-propelled or attendant propelled both of which had their own limitations.

In 1950 Canadian inventor George Klein, was inspired by Everest and Jenkins innovation 20 years earlier and set out to create a chair that removed these limitations.

Klien used the lightweight steel design as a template and would go on to invent the Klien Powered Wheelchair.

Klein’s design eventually settled on having 2 motors, which independently powered each wheel.

This reduced the strain on the motors for improved reliability, as well as allowing for greater manoeuvrability.

The end result was never before seen manoeuvrability, removing the limitations of all its predecessors in one go.

Klein’s work was so forward thinking that it paved the way for a new generation of powered wheelchairs, with this innovative approach still seen in modern designs.

And there we have it, a brief look at some of the most important moments in the history and development of the wheelchair.

Thank you for reading.

All Those Little Extras
4th December 2019

The Motability Scheme – Getting You Mobile
6th November 2019

Any cookies that may not be particularly necessary for the website to function and is used specifically to collect user personal data via analytics, ads, other embedded contents are termed as non-necessary cookies. It is mandatory to procure user consent prior to running these cookies on your website.